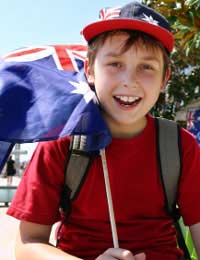 There is a great tradition in Australia that is often joked about by not only Australian's themselves but new citizens and visitors. The great public holiday is a treasured day in Australian culture when hardworking Australian's kick back and enjoy the rest.

Those who live near beaches spend the day in the water or playing the traditional game of beach cricket. City dwellers finally get the time to unravel the BBQ and socialising is an integral aspect of the public holiday.

For those moving from the UK, it's often difficult to get used to when the public holidays are compared to the UK, so we have a handy outline of the important dates in the Australian calendar.

Public Holidays Similar to the UK

This means that Good Friday, Easter Monday, Christmas Day and Boxing Day are all public holidays in Australia. Australia's also celebrate New Year's Day, although unlike Scotland, they only have the 1st of January as a public holiday. As well as religious holidays, Australia also celebrate the Queen's birthday. As the Sovereign to Australia, each state chooses when to celebrate her birthday and often they are celebrated on different days.

For example, Queensland may celebrate the Queen's birthday in June whereas Western Australia may not celebrate it until October.

Australia has a few national public holidays that are a celebration of distinctly Australian dates. Two of the most important refer to significant dates in Australia's history:

Australia also has a number of state recognised holidays that are on different days dependent on where you live. The most common of these are 'Show Days' where public holidays are held in specific cities or areas so that locals can attend the 'show'. The show is an Australian tradition, especially in some rural areas.

It is a large event where many market stalls, entertainment, traditional farming and other areas of interest are shown. For areas that don't have show holidays, there are often bank holidays in it's place. In Victoria, there is also the Melbourne Cup public holiday which is in November every year.

As in the UK, if you're employed you're often expected to take the public holiday off and you will generally be paid for this. Some people may be asked to work public holidays, but will be compensated fairly in doing so. Public holidays are definitely a time to be sociable in Australia, so make the most of them!